Post Date:09/15/2014 8:00 AM
The Laguna Beach County Water District (District) annually evaluates its service needs, programs, capital costs, and maintenance and operational expenses before recommending rate changes to the District’s Board of Directors. To continue the District’s long tradition of providing reliable water service to our customers, rate increases are needed to cover these increasing costs and expenses, which continue to increase with purchased water, pumping, treatment, infrastructure replacement and maintenance, meter reading, and billing. The District is anticipating increases from our wholesale supplier, Metropolitan Water District of Southern California, to be approximately 5 percent a year over the next five years. These increases are the result of the District’s 100 percent dependence on imported water supplies, ongoing drought in the State, the region’s limited water reserves, and worsening environmental and regulatory conditions with water supplies from Northern California’s San Joaquin Delta and the Colorado River.


The Board of Directors is proposing a multi-year rate setting strategy. If adopted, there would be a series of rate increases over the next five years. The first increase would take effect November 1, 2014 and be reflected on your bill beginning January 1, 2015. All following increases would be effective on and after November 1 of each year beginning November 2015. Rate increases over the subsequent four-year period would go into effect without further rate hearings. If adopted, the proposed rates would be subject to pass-through charges, which could include increased costs from our wholesale supplier, “penalties” or “surcharges” for water use that exceeds the water supply allocation imposed on the District by its wholesale supplier.

Bi-monthly Service Charge Proposed Increase
The District’s service charge is levied against all customers in the District on a bi-monthly basis based on the size of each meter on the customer’s premises. The charge recovers costs associated with providing water to the serviced property, which do not vary with consumption. These costs include meter reading and billing customers for each bi-monthly period, maintenance of meters and service lines in the distribution system, administrative costs, water quality testing, and labor.

Water Commodity Charge Increase
The District’s commodity charge is based on water usage. Water consumption charges are calculated based on the amount of water used as indicated by the meter. One unit of water is equivalent to 748 gallons or 100 cubic feet (HCF). The District has a two-tier budget based rate structure designed to encourage efficient water use and discourage wasteful behaviors. The Tier 1 rate provides enough water for typical, yet efficient, water use indoors and outdoors without penalty.

The Tier 2 rate recognizes that there are increased costs, primarily in the development of additional water resources and water use efficiency efforts related to higher levels of usage. Funds generated through Tier 2 cover 100 percent of the District’s water use efficiency efforts and a small portion of the cost of developing a supplemental water source. Click here for more information on the District’s Budget Based Tiered Rate Structure.

Notice of Public Hearing
This Notice of Public Hearing provides information regarding proposed basic meter charge and water rate increases to Laguna Beach County Water District customers pursuant to the requirements of California Constitution Article XIII (commonly referred to as Proposition 218).The hearing will cover the proposed multi-year rate increase for water services. This Notice has been mailed to all record owners and customers of the parcels upon which the rates or charges will be imposed, by utilizing the address identified on the last property tax assessment roll and the District’s current customer database. If adopted, the first increase would take effect November 1, 2014. All subsequent increases would be effective on and after November 1 of each year beginning November 2015 through November 2019 without further rate hearings.

Your Opportunity to be Heard
The District’s Board of Directors wants you to have the opportunity to comment on the proposed rate increases before a final decision is made. 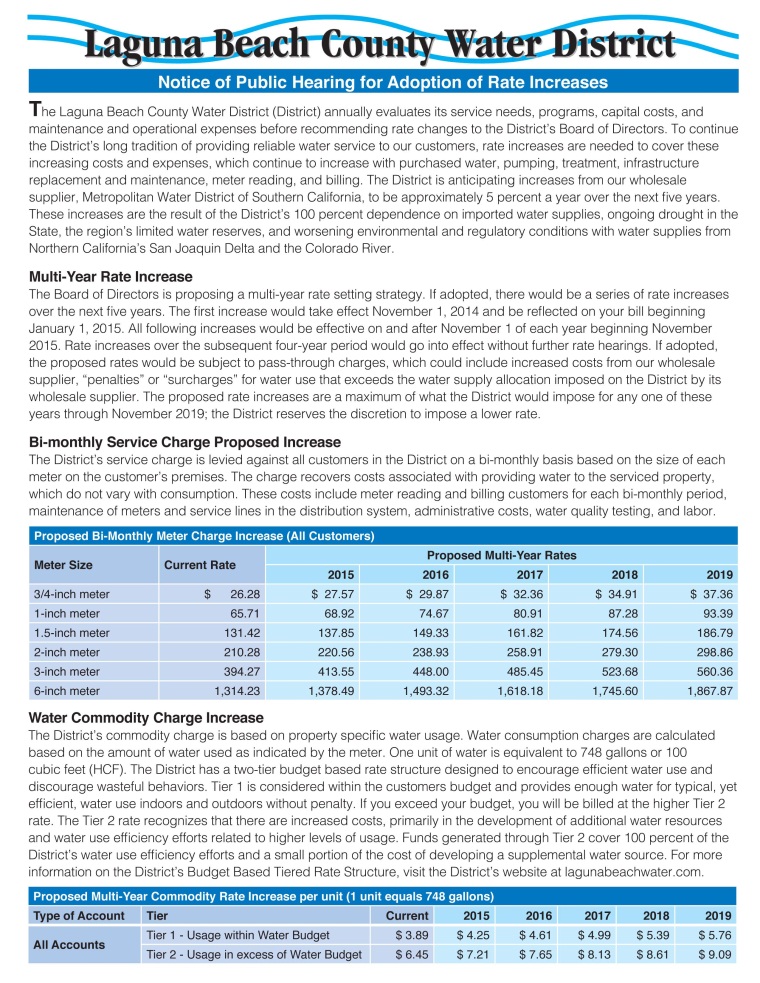