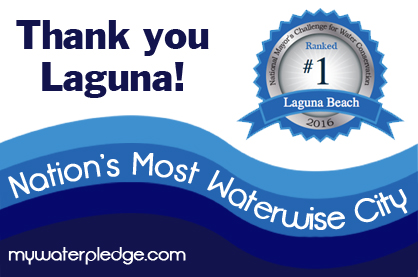 Laguna Beach residents have once again proven their commitment to conserving water, energy, and other natural resources by claiming the title of "Nation's Most Waterwise City" for a third year.

The Wyland Foundation and Toyota announced the winning cities of the 2016 National Mayor's Challenge for Water Conservation on May 16.

During the month of April, Mayor Steve Dicterow joined mayors across the country asking residents to conserve water, save energy, and reduce pollution by taking part in the Wyland Foundation's annual Mayor's Challenge. With support from the Laguna Beach County Water District, residents were encouraged to go online and pledge their commitment to protecting our natural resources.

"It's great to see residents from cities across the nation understand the importance of water and join together in protecting such a valuable resource," says Renae Hinchey, Laguna Beach County Water District General Manager. "Laguna Beach has always been a conservation-minded community. This competition allows us to demonstrate and recognize the continuous efforts of our residents, especially during this unprecedented drought."

By keeping their commitments, the combined efforts of Laguna Beach residents will reduce water waste by 52 million gallons, eliminate more than 2,400 pounds of hazardous waste from entering our watersheds, reduce waste sent to landfills by 1.2 million pounds, and save 3.5 million kilowatt hours of energy.

Laguna Beach residents, along with residents from other winning cities, are now eligible to win more than $50,000 in water-saving or eco-friendly prizes including the Grand Prize of a Toyota Prius.

For more information about the challenge, visit mywaterpledge.com.