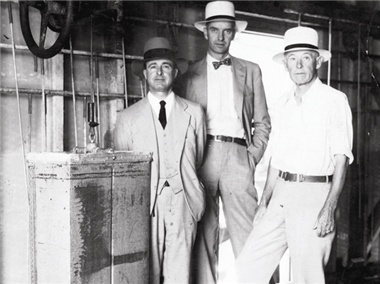 The District is rich with historical events that have been pivotal in changing the way Laguna Beach receives its water supply.

Until the early 1920s, the residents of Laguna Beach received their water from a well located north on Laguna Canyon Road when cisterns in town ran out of rainwater. Summer visitors frequently stopped and filled jugs on their way into town.

In 1925, pioneer leaders pretending to be duck hunters, traveled north to Huntington Beach where they bought 120 acres to form a Duck Hunting Club. What they had bought was the City's future water supply. Pictured from left to right are three of those leaders: Harold Reed, Joeseph R. Jahraus, and Thomas A. Cummings.

The Early Years
Water has always been hard to come by in Laguna Beach because there has always been so little of it around. Early settlers had to bring it in by the barrel, catch and save what they could when rain fell, and worry about where the next drop would come from.

Up until the early 1920's, the residents relied on a few privately owned shallow wells in Laguna Canyon for their water supply. But in 1924, the growth of the village had been so rapid that the water system, owned and operated by the Skidmore brothers, could not produce an adequate supply. The heavy pumping exhausted the surface supply and soon saltwater intrusion and well failure forced the brothers to announce that water service would be discontinued.

Conditions were so bad that many residents drove to the old county well in Laguna Canyon for drinking and cooking water. The demand was so great in the summer months that residents had to wait for hours before they could draw water. As many as 50 cars at one time would be seen near the pump. Something had to be done, as summer trade in the village was threatened.

The “Duck Hunting Club”
By the fall of 1924, village residents showed true spirit and pulled together and formed a citizens’ committee to search for a reliable water supply. With little to no water available in or around Laguna, the search pointed toward the Santa Ana River Basin.

Five members of the committee, posing as men interested in forming a “duck hunting club,” found 120 acres of water bearing land, 20 miles north in Huntington Beach. The five men divvied up a $1,000 deposit out of their own pockets, with the balance to be paid at $400 an acre.

The Board of Supervisors called for an election on May 4, 1925, and residents went to the polls and approved the formation of the Laguna Beach County Water District by a vote of 359 to 0.

On January 5, 1926, residents approved a $600,000 bond issue by a vote of 437 for and 0 against to purchase the land in Huntington Beach, build a new water system, construct a 13-mile transmission pipeline, and provide service to Laguna Beach. The system was completed and water began to flow into the reservoirs in Spring 1927.

Securing our Water Supply
Introduction of water from wells in the Santa Ana River Basin solved Laguna’s water problems for several years, but it wasn’t smooth sailing. Other water producers in the Basin sued the District to prevent our groundwater production and export to Laguna Beach. In 1933, the Orange County Superior Court determined the right of the District to pump and export 2,025 acre-feet of groundwater from the Santa Ana River Basin each year.

Unfortunately, over time pumping from the basin increased, groundwater elevations fell, and sea water intruded into the basin. By 1941, Laguna’s water supply had again become salty and unreliable.

This deterioration in the quality of the groundwater caused the District to assist in the formation of Coastal Municipal Water District and to purchase Colorado River water through Coastal MWD from Metropolitan Water District in 1943. The District’s well field in the Santa Ana River Basin remained in operation until 1948.

Laguna’s Water Future
Today, the District's water is provided from local groundwater supplies and imported water from either the Colorado River or from Northern California. In our continuing efforts to supply a reliable source of water for the community, the District has resumed its groundwater pumping in the Santa Ana River Basin and is looking into other water supply projects as future additional sources of water.

The District purchases about 3,850 acre-feet of water annually. This is equal to approximately 1.3 billion gallons delivered on an annual basis. There are 21 water storage reservoirs with a total storage capacity of 33.5 million gallons within the District, providing approximately ten days of water to the community in the event of an emergency. The system encompasses 135 miles of distribution pipelines ranging in diameter from 4 to 16 inches.